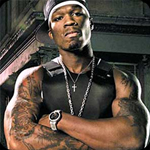 Apparently having millions of dollars off record sales wasn’t enough for rapper 50 Cent (pronounced “fiddy cent” by the kids, or so I hear), who was caught selling bootleg copies of his own movie, “Get Rich Or Die Tryin” – the film is about his life and starring him – out of his stretched limo.

NEW YORK – Rapper 50 Cent was arrested Saturday for selling bootleg movies out of the back of his stretched Hummer. Police soon discovered that the DVDs were copies of his own movie “Get Rich Or Die Tryin” due to come out this November 9th. Apparently the hustler side of him does not die easy.

When police happened upon him last Friday near Times Square in Manhattan , they overheard him saying to passers-by, “I got it all. I got the new 50 Cent joint, not due out ’til next month. Check it out. Only $5. I also got ‘Big Bootie Bitches’ the new Jenna Jameson joint. Check it out.”

The officers arrested him but let him go once they discovered he was selling his own movie.
A spokesman for Viacom, the company that owns and will be distributing 50’s movie, said that all 50 needed to do was ask for advance copies of the film. They can’t understand why he stole them and apparently in the process shot a security guard in the leg at the Paramount Pictures lot.

Wow. Some people are just too damn stupid to trust with a Hummer, and this guy is one of them.